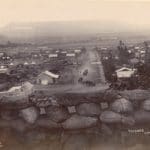 1st Battalion, The Gloucestershire Regiment sailed from Calcutta on 25th September 1899 and arrived in Durban on 13th October. By the time they arrived in South Africa, British negotiations with the Boer states of Transvaal and the Orange Free State had irretrievably broken down and the Second Boer War was two days old. The British forces in South Africa or, more particularly in Natal, were heavily outnumbered, and the rapid strategic movement of troops from India to Durban, thence north by rail through the Province to Ladysmith saved Natal from being overrun by the Boers.

But, if the initial British strategic response proved to be surprisingly swift and effective, the tactical expertise of the British generals and troops in the field was equally swiftly proven by the Boers to be severely limited. As General Sir George White concentrated his small but growing force around Ladysmith, the Boers forces invading Natal grew in strength and attempted to surround the British, prevent reinforcements from getting through and lay siege to the town. On 24th October at Rietfontein the Gloucesters received their baptism of fire when, as part of a small holding force, they successfully prevented the Boers from interfering with the movement of a fresh British column coming in from the north west to join Sir George White’s army. The nature of this as yet unfamiliar style of warfare was described by Lieutenant A.H. Radice:

“For several hours the Battalion remained lying on the open veldt in long lines, fully exposed to the Boer fire. The hail of bullets gradually became less but never ceased altogether, every movement on our part drew a burst of heavy fire. Nothing could be seen of the enemy; no movement could be detected in the empty landscape; and yet the double crack of the Mausers and the swish of the bullets went on unceasingly. Hours passed without any change – the casualties mounting up. Colonel Wilford was shot through the head and killed instantly while walking calmly along the firing line. Lieut. Hickie, the size of whose boots had always been a joke among the subalterns, was hit in both boots and wounded in the foot. In India the care of ammunition had been so hammered into the men that it had become second nature to preserve and account for every round. One man at the height of the fight asked me if he should pick up his empty cases, and another asked me what he should do with two packets of ammunition he had just picked up.”

Sir George White prepared Ladysmith for a siege, and the Gloucesters were digging in and sandbagging with the rest. The Boers were closing in on the town, and bringing up heavy artillery and on 29th October the British attacked them at several points, With Sir George White committing the majority of his force of 12,000. Three and a half companies of the Gloucesters were left behind on outpost duty, together with some sick from the other four and a half companies of the battalion. The attack was poorly executed and failed miserably. The 450 men of the Gloucesters attacking force together with a battalion of the Royal Irish Fusiliers were surrounded and forced to surrender at Nicholson’s Nek. The lack of understanding of what had happened at Nicholson’s Nek was reflected in White’s own report:

“It was then found that the position was too large for them to adequately occupy, and that only the most pronounced salients could be held. The Boers appear to have gradually surrounded the hill, and after a fight extending over several hours, our men’s ammunition began to fail owing to the ammunition mules having stampeded, as already described. The advanced parties holding the salients were driven back on the main body in the centre of the plateau, and the Boers gained the crest line of the hill, whence they brought a converging fire to bear from all sides on our men crowded together in the centre, causing much loss. Eventually it was seen that this position was hopelessly untenable, and our force hoisted a white flag, and surrendered about 12.30 p.m.”

Ladysmith settled down to prepare for a siege, which was to last almost four months, with the remaining Gloucesters of 1st Battalion forming part of the defending force. The progress of the siege was dominated by the Boer’s modern artillery, especially the Creusot 155mm gun christened “Long Tom” by the British. There was only one attempt to assault the British position, an attack by the Boers on 6th January which ended in failure. Sergeant Cowland of the Gloucesters described the last day of the siege in his diary entry for 28th February 1900:

“… Sir George White visited all the outposts today and exhorted us to keep the flag flying at all costs. He looks terribly thin and ill. The anxiety is surely telling on him. No news this morning and not a gun to be heard. What can it mean? All the guns in Ladysmith have suddenly tackled Long Tom. …

“The Boers are using a large derrick to take Long Tom down and our guns are pouring in a hurricane of shot & shell. The naval guns have knocked the derrick down, but the Boers are continuing their work. They are certainly a brave lot. There was great excitement about 7.30pm when a body of horsemen were seen approaching the town from the direction of Intombi Spruit. In answer to the challenge “Who goes there?” the welcome answer came back “Ladysmith Relief Force”. Then ensued a scene of indescribable excitement and enthusiasm. We were all running about like mad, kissing and crying by turns, such was the depth of our feelings. The party proved to be two squadrons of Natal Volunteers under the command of Lord Dundonald. They had reason to be proud of themselves that night, and can tell with pride in years to come of how they had the honour to be the first of the relief force to enter Ladysmith. Sir George White met them at the entrance to the town and thanked them cordially for coming. He afterwards made a short speech to the townspeople and garrison in which he expressed great sorrow at having to reduce our rations to such a starvation point, but now that it was all over he thanked God that we had been able to keep the flag flying. “God save the Queen” was then sung by all present in a very impressive manner.”