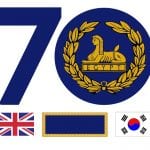 The #Imjin70 Working Group are finalising a programme of events and commemorations, to mark the anniversary.  The Group is Chaired by Lt Col Anthony Ayres (The Rifles County Colonel for Gloucestershire).