Saturday the 28th of August sees the largest public event across Gloucester City for nearly two years.  Gloucester Goes Retro will be focusing in the docks this year and the Imjin 70 Group along with the Soldiers of Gloucestershire Museum will be at the heart of the event in Back Badge Square where they are running the ‘Imjin Village’. This is part of the commemoration and celebration of the seventieth Anniversary of the Battle of the Imjin River in which the Glorious Glosters fought an action that probably changed the course of the war and history.

Come and visit a trench from the Battle and learn what happened; talk to modern day soldiers from the two units that fought there and see the weapons and systems they use today. And meet the county cadets who will be on hand to enthuse about joint their countywide organisation.

See the weapons that the 170 (Imjin) Battery Royal Artillery used on Gloster Hill, visit the Korean Gallery in the museum for all the details.

Immerse yourself in South Korea today, a successful and peaceful nation; watch Korean Folk Dancing in the Square by members of the Korean Veterans Association UK and sample genuine South Korean food from a famous London Korean Chef whilst you listen to some great music played on the Imjin Stage and enjoy a drink from the Imjin Bar.

Lt Col Tony Ayres (Chairman of the Imjin 70 Gp and Trustee of the museum) says” The Imjin Village is where we celebrate the success of South Korea and our very strong relationships with them, particularly the City of Paju.  Come to the Imjin Village at Gloucester Goes Retro to see, hear, taste, enjoy and learn about South Korea today and how Gloucestershire helped to set the foundations for their success.

To provide this jamboree of the senses we have pulled together both military units and civilian groups from around the country who want to commemorate and celebrate this important anniversary.  It will be a great day out” 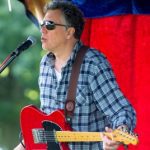 Also “on parade” will be The Psychedelich Hearts Club Band lead by Simon Tittley. Simon’s connection with the Battle is a very personal one as his father was there in Korea as a Centurion tank crewman with the 8th Kings Royal Irish Hussars who fought alongside the Glosters….

Simon says “ The  Battle of Imjin River has always been an important part of my life. I was born a few years after the Korean War and my father stayed on as a professional soldier. When his friends from the battle visited, I could tell that they had a very special bond and I found that this togetherness was one of the factors that made me convinced that I should become a musician “

When Simon heard about this special day he immediately wanted to become involved.

The event starts at 10am. The Museum will be open as well.