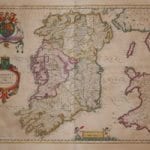 Regiments were subject to inspections from time-to-time to ensure that all was in order and to rectify any problems that might have arisen. On 25th July 1725 Barrell’s Regiment was reported on after an inspection by Major-General Thomas Pearce while they were stationed at Limerick in Ireland.

“In obedience to your Excellency’s Commands I have viewed the above Regiment. The men are very good and the Regiment is well disciplined, performing their exercises and firing extremely well, the clothing and accoutrements are very good delivered to the men the 18th of July; their Arms are bad.

“I can’t but Observe to your Excellency the particular care this Regiment have taken to show themselves complete, notwithstanding what they have suffered from death and desertion. The men are regularly cleared and no complaints made either against the Officers or from ye inhabitants; this Regiment have no Camp equipage.