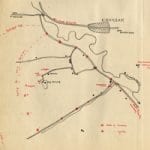 In December 1920 1st Battalion, The Gloucestershire Regiment was sent from England to County Cork in Ireland. Ireland was in the middle of its War of Independence and the Gloucesters’ operations focused upon raids on houses and farmsteads, patrols and convoy protection around Kilworth and Kanturk looking for I.R.A. members and arms caches. The battalion suffered no fatal casualties from rebel activity during their tour of duty, and did score one notable success. Bicycles were found more useful for patrol work than motor vehicles (especially as the bridges on the rural roads were frequently blown up), and the battalion had 500 of them. The presence of a patrol was almost invariably signalled to the local populace and rebels by Republican sympathizers blowing horns (“conchies”), which were sometimes made from broken bottles.

Fifty years later, retired Captain A.H. Richards recalled his time as a private soldier with the Gloucesters in Ireland in 1921:-

“The locals were quite affable and we did drink with them knowing full well that they were at least IRA sympathizers but in the main appearing friendly. They were nearly always able to tell us where we had been on our latest operation and what we had been doing whether it had been by day or night. On occasions we would search a creamery and enjoy the offer of lovely, rich, fresh milk.

“The main operations consisted of patrolling the railway lines or guarding the bridges or searching farmhouses. The IRA often blew holes in the roads to prevent our movements but this was overcome by carrying long steel girders on the Crossley tenders and which were placed across the holes. In retaliation we would sometimes take the wheels off their carts, the farmers’ carts, so that in any event they could not get to market until the holes had been filled. At any time of the night or day we might be suddenly alerted and the order of the day was Bondook, [rifle] Bandolier and Bike and away we went. The bicycles were the great heavy things of World War I and extremely tiring. Whatever the time of day or night we sallied forth the “Conchies” would start up and the element of surprise was lost.”

The most notable operation was carried out at Kishkeam on 15th/16th May and led by the Battalion’s Intelligence Officer, Lieutenant R.M. “Nap” Grazebrook. Grazebrook had found out that Sean Moylan, commander of the I.R.A.’s 2nd North Cork Brigade, was hiding in the area. Grazebrook’s troops closed in on a local farm. Lieutenant Ladds takes up the story:-

“. . . As we were climbing a bank near the farm we were greeted by rifle fire, extremely heavy by Irish standards, (I now think that it was probably from our own cyclists). I for one was quite glad to get off the bank and the farmers did not like it at all.

“We then heard firing from quite near and moved on to another farm, where we found Armine Morris, and what appeared to be two parties acting defensively, awaiting prisoners. Armine told us that the I.R.A. were about and that Bertie Temple had been fired at with a revolver at almost point-blank range; luckily, he was not hit. We moved off to the right of the farm and soon found a track – by this time it was getting light. We found ‘Nap’ Grazebrook, Bertie Temple and his party, who were searching gorse bushes and cover. I heard a shout and one of the men brought in a prisoner, armed with a loaded revolver and two Mills bombs – this person turned out to be Sean Moylan; later we rounded up 14 of the active service gang. On searching the area a R.I.C. sergeant, walking with Manley James, found a cache of arms, a box slid into a hole in a bank and cunningly concealed – this contained the Hotchkiss gun which had been captured from the 17th Lancers at Mallow some months previously, another revolver, ammunition, telephone apparatus, – also a cheque for 115 Pounds IRA pay, which later with a little persuasion we forced the bank to cash; the Battalion’s Summary Court A/C had a lucky day.”

Moylan was tried and sentenced to a prison term but released in August 1921 following the signing of the Anglo-Irish Treaty. Following the Treaty’s ratification in both Ireland and Great Britain, the British Army quit the Irish Free State and the Gloucestershire Regiment left for England, then Germany, in January 1922.

In 1947 Grazebrook, now a former Lieutenant-Colonel of 1st Battalion, wrote to Sean Moylan, who was himself now in the Irish Cabinet and Minister for Lands, asking him if he would like to write an account of his arrest in May 1921. Moylan replied:-

“Dear Sir,
I have very clear memories of May 16th, 1921, some of them, strangely enough, very pleasant ones. I don’t know if it would be possible for me to write a story such as you desire for your regimental Journal. Any such essay would naturally be coloured by my own viewpoint and the result might be either unacceptable to you as editor or lack interest for your readers. I shall think over the matter and may be able to produce something for you. Can you tell me when the Gloucesters came to Kanturk?

No such article appears to have been written.

Picture: The Battle of Riordan’s Farm