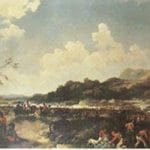 The War of the Third Coalition saw much British activity in the Mediterranean, in particular in southern Italy, the Kingdom of the Two Sicilies. On 4th July 1806 a small British army of around 5000 under General Sir John Stuart met and defeated a French force of similar size under the command of General Jean-Louis Regnier, at Maida on the Italian mainland. The battle did not decide the campaign, and by the end of the year the British had evacuated their forces to Sicily. The battle’s main claim to fame was the influence it had upon future historians who used the example of Maida to demonstrate the superiority of British line over French column. In fact, if the battle demonstrated anything, it was the superiority of British tactics and fire discipline over that of the French, who, in the climactic episode of the battle were also in line when the Light Battalion under Lieutenant-Colonel James Kempt drove them off.

The 61st (South Gloucestershire) Regiment had two companies at Maida. The grenadier company formed the personal escort and bodyguard of General Stuart, and the light company were in Kempt’s Light Battalion.

The British Minister in Naples was not slow to report the success of General Stuart’s army to London:

“The battle of Maida, upon the 4th of July, will long be remembered in this part of Europe, as a remarkable proof of the superiority of British courage and discipline over an arrogant and cruel enemy. Of the nine thousand men whom General Regnier commanded in the province of Calabria ulterior, not more than three thousand are left to attempt their retreat towards Apulia; the remainder are all either killed, wounded, or made prisoners. Every fort along the coast, – all the stores, ammunition, and artillery prepared for the attack upon Sicily, are become the prey of the victors; and what, perhaps, may be considered of still more consequence than these advantages, an indelible impression is made of in this country of the superior bravery and discipline of the British troops.”

Sir James Kempt was a fine commander of Light troops, as he would again show when commanding a brigade of the Light Division in the Peninsular War.  He had also served in Egypt, as ADC to Sir Ralph Abercrombie, and, at Waterloo, the 28th (North Gloucestershire) Regiment were in Kempt’s brigade of Sir Thomas Picton’s 5th Division.
Picture: The Battle of Maida