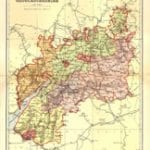 1782 saw the introduction of County titles to most of the Regiments of Foot in the British Army. Regiments had always recruited from far and wide in the kingdom and beyond, and, indeed, would continue to do so. Both the 28th and the 61st recruited heavily in Ireland for many years, as did many other regiments. However, the association of the various regiments with the counties of the British Isles increasingly came to mean that the army as whole began to develop the regional characteristics that were to stand it in good stead for the next two hundred or so years.

Lieutenant-Colonel Morris of the 61st failed to get his way in his desire for his Regiment to be linked with Aberdeenshire, for it was there that he had first raised the 89th Foot in 1759, a regiment that had since been disbanded.

In Gloucestershire, recruiting officers for the 28th quickly took advantage of the new recruiting system, although they still had to catch deserters as well!