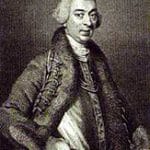 The Battle of Fontenoy of 11th May 1745 is most often remembered in British history for the meeting on the battlefield of the British and French Guards and the elegant exchanges (which were later embroidered by Voltaire, no less) between Lord Charles Hay of the 1st Foot Guards and his opposite number, the Comte d’Auterroche.

Whatever the truth of that particular incident is, the fact remains that all the British infantry fought remarkably well that day, only for the allied army, commanded by the Duke of Cumberland, to lose the battle to the French under Marshal de Saxe. The 28th Foot were there, led by their Lieutenant-Colonel Lord George Sackville, a good friend of Colonel Bragg.

Sackville was wounded and briefly taken prisoner, to be released after having his wounds dressed and enjoying French hospitality.
Sackville’s later career was to be one fraught with disgrace and ignominy. Bragg left him in his will his entire fortune of 17,000 pounds sterling, and the Duke of Cumberland, (later to acquire the sobriquet of “Butcher” during the Jacobite Rising of 1745) thought Sackville courageous and well suited to a career in soldiering. Yet at the battle of Minden in 1759, as commander of the British and German cavalry, he repeatedly disobeyed orders to send his men forward, thus denying the Allies a decisive victory. He was cashiered as “…unfit to serve his Majesty in any military capacity whatsoever.”

His later political career as Lord Germain fared no better and he bears a large responsibility as Secretary of State for the American Department in the disastrous prosecution of the war during the American Revolution.