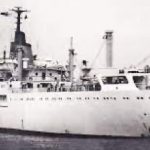 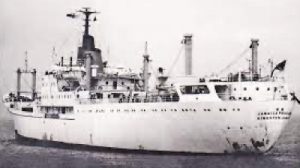 Embarkation leave over and in our Gloster berets and BD with new kit bags - off we went. There were only six of us in the draft, we were going by ship from London, via a staging point in London. We thought we were top of the pops and did plenty of 'scuffing' on Waterloo Station. Scuffing was considered by us to be a sign of old soldiers. No doubt to the many old soldiers watching from their civvy jobs we were just 'another lot of rookies'. We cared not!

After a night staging we were taken to West India Dock to board SS Jamaica Producer. A banana boat with passenger accommodation. It was a case of boots off (not allowed on ships) so definitely no scuffing. After being directed to our cabins and stowing our stuff we went to the dining area for our evening meal. It was the first time I had been anywhere with waiter/waitress service in my life! That evening I remember being thrilled to bits as we heard all the preparing to sail noises - gang plank up, casting off etc. waiting for the tide. Then in what seemed no time at all we were in the Thames Estuary and heading out to sea and the big wide world. Other ships were not far away having left on the same tide. It was a bit foggy and fog horns added to the atmosphere. As I watched the lights on land gradually disappear Shelley Road and Guest Wood and Ling were a million miles away!

Down the English Channel and into the Atlantic we saw other ships, and I wondered where they had been and where they were going - We were West Indies bound. As we continued westward the weather stayed good and a lot warmer. After a week or so we got up in the morning to find the ship moving very slowly past land which we were told was Haiti. I had 'swotted up on the West Indies' on leave and read that Haiti was a centre of black magic and all things evil. Looked alright from a distance. Anyway we had clearly arrived in the West Indies and soon after docked in Kingston, Jamaica. I expect some of the crew were glad to see us go, they would have preferred civilian passengers and a big tip at the end of the voyage. We didn't do tips. It has to be said that Kingston has a smell of its own, it had then. Undoubtedly better now. We were met on the dock by an NCO and taken to Up Park Camp. Old colonial type barracks that probably had not changed much since. We were kitted out with KD (khaki drill) shorts, hose tops, puttees and told that in a day or two we would be going to Newcastle for more training. Newcastle was an old hill station in the Blue Mountains once used by Colonial families to 'get out of the heat'. It is also the location of the military cemetery where many old soldiers, sailors and Brits RIP. Gill's relative Henry Topp had deserted in Jamaica about 65 years before, and I have often wondered whether he ended up there. Can't find him anywhere else. Anyway we did our 'extra' training under the direction of Captain Farrar-Hockley MC (later a General, Commanding NATO Land Forces, about as high as you can get in the Army) and returned to Up Park camp.

Back in Kingston we were allocated to our Companies. For some reason I was posted to MT HQ Company. Somewhere in my records there must have been an entry under 'civil occupation' - Road Haulage. I wasn't too keen I regarded myself as a rifle company man - over the top and all that. Anyway MT wasn't too bad it involved the issue and accounting for petrol, oil and lubricants.

There was a danger of being given a stripe, suffice to say the danger was averted, I wasn't ready for fame. By the way the accounting bit was the MT Sergeant's job but he was not very good at sums. In the year before our arrival in Jamaica there had been an amalgamation parade of the first and second battalions. There may well have been an amalgamation but there was still a lot of rivalry. " Comments such as "you will have to forgive him, he's second battalion, they wear their boots upside down" etc. For the record there was once over 20 battalions of Glosters!