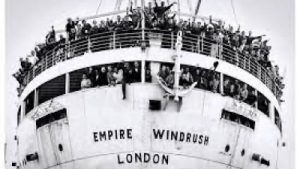 We left the West Indies about November 1949 arriving in Liverpool early December. It had been a fairly uneventful trip. The accommodation typical 'Trooper', cabins for the Officers hammocks for O/Rs. The weather for nearly the whole trip was 'rough' and very very much colder. A lot of sea sickness. Very indifferent grub. Not a bit like Jamaica Producer!

From Liverpool it was train to Roman Way Camp Colchester. I remained in 'A' Company. While in Jamaica and Belize I had become aware of nearly everyone having a sort of suffix to their name, either relating to their home town or previous service eg Bunna Braddock, Winchcombe Smith, Jack Kassell Jones. Of course there were still the usual Dusty Millers, Geordie Jones, Janner Hobbs etc. There were very few Jack Jones or Pete Smiths. For some reason all this fascinated me, I didn't want to be just Ken Fisher. Then I heard myself referred to as 'Fisher Belize Man', that was enough for me I was signed on by Captain Farrah the Para Hockley MC who by then was Adjutant. A very significant event for me. I kept it quiet.

Disembarkation leave was not a great happening, the West Indies might have been an adventure for me, but my 'exploits' fell a bit flat in Shelley Road! Some referred to it as a 'Cooks Tour'. There was a lot more enthusiasm for the duty free 200 cigs and bottle of whiskey though!

By the way in those days it was generally accepted that were three places in UK to be avoided at all costs -CATTERICK, ALDERSHOT and COLCHESTER, to be in any of them could result in comments like 'poor sod' from those more fortunately posted!

In the West Indies the battalion had been widely spread -Jamaica Bermuda and Honduras so for many, including me, being back altogether was strange. We had become part of the 29th Independent Infantry Brigade -Us, Royal Northumberland Fusiliers, Royal Ulster Rifles, 8th Hussars Regiment RA, Royal Engineers, Royal Signals, RASC. Fisher Belize Man was OC 'A' Company's forward radio op -plus part of the Company HQ defence set up, plus a thousand odd jobs. The Company Sergeant Major was at first, as in Belize, CSM Widdows. A 'traditional' CSM. He was referred to as 'The Widder' Its worth remembering also that in early 1950 there was still 'rationing' in the UK.

Normal training continued during early 1950 with 'intakes' and 'outgoings' of National Servicemen. Then in mid 1950 the Korean emergency happened. 29 Brigade were to 'go'. To get the Brigade up to fighting strength it was deemed necessary to recall reservists to the Colours. This was done and reservists from a wide range of regiments, including The Devons, The Dorsets, Royal Berks, Royal Ramps, Queens, Royal Norfolks, Middlesex, Essex, West Kents, Paras and SAS. This included officers. Many were close to the end of their reserve service, many thought reserve service was for the defence of the realm, many had been POWs in Europe or the Far East. They all descended on 'Colly' 99% not happy. By the way during the war there were nine battalions of Paras.

There was besides this influx of reservists a lot of changes within the original set up. National Servicemen were posted 'out'. In 'A' Company case The Widder also left and Sgt Gallagher DCM took over. He was promoted to WOII. Within a few weeks the CO, Lt Colonel Came had converted this cocktail of soldiery into a unit 'fit for action'. Something of a miracle. We might have become 1 Glosters but during our time in Colly many blokes were still referred to " as 'im out the Queens" or ''the Essex bloke" etc. Some secretly wore their old regimental badges when going out! The RSM would have gone bananas if he had known!

So it was embarkation time.

We went by train from Colchester to Southampton to board HMT Empire Windrush. There were a few families there to wave goodbye, I suppose they lived locally.

Relations with Egypt were still a bit strained (Suez Crisis) but evidently because we were a UN Force allowances were made. We had a few hours shore leave, and did a bit of a desert route march. Part of the difficulty of keeping fit on a long voyage. Next stop Aden. Shore leave. A look round the crater. Fish and chips in a cafe. I am sure the fish was still alive the way it looked at me; I didn't eat it. On to Ceylon. Went to look round a temple, left my shoes outside. Someone nicked them so back to the ship in socks! Singapore next stop, bit of shore leave nothing much memorable there.

Up until then the weather had been hot. Now it got a lot colder. Next event was being met by a US Navy ship which scanned us with search lights and escorted us in to Pusan. A bit of a surprise then, we were met on the dockside by what appeared to be a very big US Army band. Not at all what we expected. Disembarked then put on a train headed north. Now, very, extremely, Korean cold.

During our voyage UN Forces which had been penned in the Pusan Box had broken out of the box and were advancing rapidly north. US Army engineers had done a record breaking job in repairing the railway. The train journey was not without incident. Shortly after going over a 'temporary bridge', I am sure it wobbled, the train stopped then went backwards then stopped again. Looking out of the window we could see front part of the train disappearing in the distance, it had broken in half. Fortunately, the emergency brakes had come on to prevent us rolling backwards further. Unfortunately, the front half had contained the grub. Then another miracle. An American Army man appeared from nowhere. We explained the position and in what seemed no time at all he had supplied rations aplenty and to spare.

After what seemed ages, probably only a few hours, the front half of our train graciously came back to re-join us. The higher ups in the front half of the train then had the cheek to take our 'spare' US army rations!

You will note that my recollections reflect the 'private's eye'. Rather than the 'Big Picture'. There are a host of books on the latter.

We eventually arrived at our staging spot, and were put in to an abandoned school, must have been a junior school furniture was size 1. We then had a 'settling in exercise'. Appropriately named EXERCISE FIRST FROST, it was that alright.