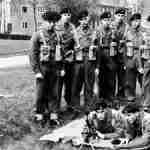 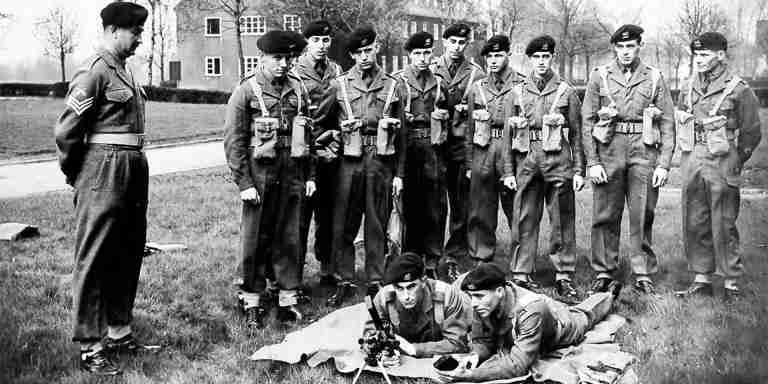 Ken Fisher, a Korean war veteran has written a blog of his life and it will be reproduced here in a series of posts.

Early in 1949, not long after I turned 18, I was notified about National Service and told to report to Jamaica Street in Bristol for a medical. I passed as fit, but at that time didn't know if it was for the Navy, Army or Air Force. I didn't much care. Anywhere other than Shelley Road and Guest Wood and Ling suited me.

Eventually I got my National Service call up papers to report to HQ Wessex Brigade at Bulford Barracks, Wilts on 3rc1 March 1949. I would be met at Salisbury Railway station and taken by military transport to Bulford. We were duly met, a large intake of callow youths I suppose all a little apprehensive because of the tales from previous NS men who had 'been there, done that' sort of thing.

We got sorted out pretty quick, issued with kit and allocated to platoons etc. The Wessex Brigade at that time comprised Royal Hampshires, Wiltshires, Devons, Dorsets. Royal Berkshires and Gloucesters. I was 'badged' Royal Hampshire but was told that was just for initial training. Little did I realise at that time that years later I would be training the very last intake of national servicemen at Gloucester. (mostly university graduates and others who had been deferred for one reason or another) A posh lot. Many of whom went on to become NS Officers.

We had been told about bugle calls and the importance thereof at our initial briefing. We were all getting to know each other in the barrack room. When we heard our first 'call', it was 'cookhouse' so we all trooped up to the cookhouse very self-conscious, we were the new intake, the lowest of the low. In National Service terms anyone with more than four weeks service considered themselves 'an old sweat'. Anyway we got our first Army meal. Despite previous foreboding I found it pretty good. You got a choice, even of puddings! Never had any complaints then or since. I soon got settled in to barrack room routine and was pleased to discover the comradeship that exists only in army barrack rooms among the 'rankers'. I also found I was fitter than most so had no difficulty in coping with the physical side of things.

Another thing that became apparent was that despite the selection procedure that was supposed to identify men that could not read or write many had slipped through the net. They ought to have been sent to the Primary Education Unit. Some therefore could not write letters or read letters, read or understand posted orders etc. This is where I was able to help.

I was often asked to read letters and write replies. Sometimes it was a case of taking dictation, in others it was a case of 'put what you think'. The latter was a bit of a challenge. Easy enough to 'Dear mum and dad, the weathers awful, food's awful, the sergeants are awful, sell the pig and buy me out' sort of thing. Replies to wives and girlfriends, some of whose letters were, well -'frank' required a lot more thought and imagination. Anyway I think I kept the wheels of romance turning. Sometimes I used to wonder, if the bloke had difficulty with the 'writing' probably so did his girlfriend. Perhaps there were four of us in this correspondence.

I will not bore you with the absurdities of 'bull' in basic training, boots polished to destruction etc., and drill. Army medics had decreed that 'stamping' was bad for your health so drill sergeants ( drill pigs to you and me) would be yelling "stop yer stampin' -put yer foot down 'ard". There must be a difference? Anyway the weeks passed, everyone got fitter and put on weight I put on over a stone. No one died of starvation or boredom.

We did all our final weapon training tests, I came 'top' of the written, the first time in my life I had been top of anything- except batting averages. We did our passing out parade. Then it was a case of who goes where. I had a yen to go to the Royal Berks who were in Asmara (Eritrea) and wore the 'bush' hats I quite fancied. However, it was not to be. I was posted to 1 Glosters in the West Indies. I didn't get a bush hat, just an extra badge to polish (back badge).