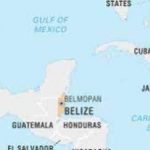 The 5 day trip to Belize was to be on RASCV 'CATANIA' (Royal Army Service Corps Vessel). It had an unenviable reputation. Apparently it had started life as a US Navy submarine chaser and been re-engined. Coming from Bath where there was an Admiralty Department -Directorate of Naval Small Craft Disposals -whose job it was to flog off what was left of the Navy -I wondered why something more appropriate had not been provided for my voyage! Anyway we set off from Kingston, there were only three passengers. The Glosters Quartermaster-an RAMC Corporal and me. Although being a military ship Catania was crewed by civvies.

Shortly after leaving Kingston we hit really bad weather and evidently got blown off course.

Anyway we finished up in the Cayman Islands. The island we anchored off had a coral reef so it was a case of 'catch a canoe'. We were allowed ashore which was a hair raising experience -I had hair then. I remember closing my eyes as we approached what appeared to be a wall of water, but was in fact a 'gap' in to the lagoon. The island was quite small, a few tin huts a few palm trees and as far as I could see hardly any people. It was obviously not the centre of dubious world finance and millionaire's yachts. Still I can say I have been there, not many people have.

Our voyage continued and we arrived in Belize a couple of days late. Belize, by the way, when viewed from the sea appears to be below sea level. Probably is. Our final destination was Airport Camp which was about 15 miles from Belize up a track through the jungle. The camp was just a collection of huts in the middle of nowhere. 'Airport' was rather an ambitious name, which was just a short landing strip with a shed. It could only handle light aircraft and more than two a day was busy.

My job in A Company was the same as in Jamaica, petrol oil and lubricants plus 'tech stores' plus i/c Diesel Electric Generator and petrol engined water pump. Somewhere somebody got their wires crossed because A Company clearly thought that was why I had come 'to do the lights and water'. However, needs must when the devil drives and I got it sorted, but it did mean I had to have a bunk in the generator/tech store shed. The POL account was a bit 'iffy'. As there were no petrol pump facilities petrol had to be bought locally. It came in 50 gallon drums from America. American gallons are not the same as Imperial gallons. The previous occupants of my job had been buying American and recording Imperial thinking they were the same, hence an embarrassing amount of buckshee petrol had accumulated, so that had to be sorted for which I got a few brownie points.

Airport Camp was not a Caribbean paradise by any means. Being in the jungle it was home to a host of nasties. Mosquitoes were a major problem for which we had to parade daily for the issue of mepacrine tablets by the Orderly Sergeant who had to watch you swallow them. They turned you yellow especially in the face. We were also issued with SCAT anti mozzi stuff you rub on exposed bits. Not very effective. There was a host of animals reptiles and insects always ready to have a go at you. I got bitten by a scorpion in the arm; apparently there are several types of scorpion, mine was fortunately the non-fatal sort, still hurt though.

Life was pretty boring. Belize itself had little to offer, a few bars and that was it. We had a NAAFI but it was very small and had very little stock. The only major 'event' while I was there was that one of our blokes was murdered down town. He was given a full military funeral. Regimental Band from Kingston, people from England, local Colonial service reps etc., plus a volley fired over his grave. Very elaborate, the Army and Colonial Office pulled out all the stops.

Eventually it was time for us to be relieved by the 'Skins' -Royal Inniskilling Fusiliers. HMT (Her Majesty's Trooper) Empress of Australia arrived, she looked bigger than Belize itself. She anchored a way out and we boarded via lighter and settled in for the trip back to UK.