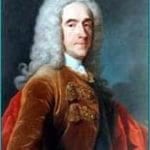 After having survived the swingeing cuts in the army establishment following the Treaty of Utrecht in 1713, Gibson’s regiment of 1694, now under the command of Colonel William Barrell, was selected to take part in the expedition against Spain in 1719. Spain was in open support of James Stuart, Pretender to the British Crown, and the attack on the Galician coast of north-western Spain was intended to wreck Spanish plans to land an invading army in Scotland. The original target of the British force under Viscount Cobham was Corunna, but this was later switched to Vigo and the surrounding area.

Seven Spanish ships were seized in Vigo harbour, and the British infantry was landed, led by their grenadiers. Vigo swiftly fell after being surrounded on 1st October, the troops finding plenty of wine to quench their thirsts, and when the Citadel fell. a vast cache of arms and ammunition was captured. More arms were captured when General Wade with 1,000 men took the nearby town of Pont a Vedia in the middle of the month. A total of 10,300 barrels of gunpowder, 13,000 muskets, at least 114 pieces of ordnance and a multitude of other stores fell into British hands.

Spain sued for peace, and the brief war came to an end.