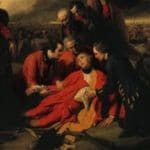 In 1757 the 28th Foot sailed for the Americas with the Expeditionary Force under General Wolfe whose task was to wrest Canada from the French. The first action in which the Regiment was engaged was the Siege and Capture of Louisbourg, a strongly fortified post on the Eastern Seaboard of Nova Scotia. A year later they sailed with Wolfe up the hazardous St Lawrence River. After numerous unsuccessful attempts to gain a foothold on the mainland of Canada, a   proposed plan of a silent landing below the cliffs of Quebec was conceived. On 13th September 1759, the 28th was one of the leading regiments to scale the Heights of Abraham. When the army was drawn up to await General Montcalmâs attack it was at the head of the 28th that General Wolfe posted himself. The enemy advanced, firing as they came. When they were within 40 paces of the motionless redcoats Wolfe gave the order to fire. This first staggering volley and the quick succession of volleys that followed broke the French line, and at Wolfe’s command the whole of his force advanced to achieve the victory that eventually won Canada for the British. Wolfe was wounded three times and survived just long enough to hear that victory was assured.

Ensign James Henderson of the Louisbourg Grenadiers, later the 28th Foot, described in a letter his part in the battle and the death of Wolfe:

“… I myself received two wounds; my concern for him was so great I did not at the time, think of them when the General received the shot. I caught hold of him and carried him off the field. He walked about a hundred yards ands then begged that I would let him sit down. Then I opened his breast and found his shirt full of blood, at which he smiled and when he saw the distress I was in, ‘My dear’ said he, ‘don’t grieve for me, I shall be happy in a few minutes, take care of yourself. I see you are wounded, but tell me, Oh tell me, how goes the battle?’

“Just then there came some officers who told him that the French had given ground and our troops were pursuing to the walls of the town. He was lying in my arms, just expiring, that great man whose sole ambition was his country’s glory. Upon this news, he smiled in my face. ‘Now’ said he, I die contented.’