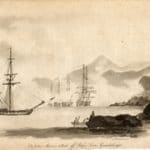 The first battle honour to be won by the 61st Foot was “Guadeloupe”.  The Regiment left Portsmouth in November 1758 and was with the fleet when it began the bombardment of the fortified town of Basse Terre on the island. The town was swiftly captured, but the troops soon succumbed to disease in their fever-ridden encampments. They were reduced to half their strength, and among the fatalities was the expedition’s commander, Major General Hopson. The capture of the islands began to look increasingly impossible. The new commander, Colonel Barrington, took charge of the situation and systematically began to eliminate all the scattered centres of French resistance on both main islands.

The 61st, under Lt.Colonel Barlow, took part in the final operations in April 1759. Brigadier Clavering’s report in _The Gazette_ describes the final engagement:

“We pursued them as far as the heights of St Marie’s, where we again formed our men for a fresh attack on the lines and batteries there.

“Whilst the barricadoes were levelling for the artillery, we attempted a second time to pass the woods and precipices that covered the flanks of the enemy’s lines; but, before we could get up our cannon, they perceived this movement, and began to quit their lines to oppose it, which made us resolve, without any further delay, to attack them immediately in front; and it was accordingly executed with the greatest vivacity, nothwithstanding the constant firing both of their cannon and musquetry. They abandoned here all their artillery, and went off in so much confusion, that they never afterwards appeared before us.

“We took up our quarters at St Marie’s that night, and the next day entered the Capesterre, which is the richest and most beautiful part of this or any other country in the West Indies. Eight hundred and seventy negroes, belonging to one man only, surrendered this day.”

Guadeloupe was returned to France in 1763, a bargaining chip played in the Treaty of Paris. The British were to seize and occupy Guadeloupe three more times over the next sixty years of various Anglo-French wars, one of many filched sugar islands that were either kept or exchanged at the peace table. Today, Guadeloupe is a Departement of France, and thus part of the European Union.