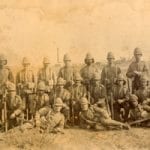 The invasion scares that had periodically flared up in Britain during the French Second Empire of Napoleon III had abated by 1881, but it was recognized that the regular army had to modernize in view of the rise of the influence and power of Germany. Also, the Volunteer units that had first been raised in 1859 were still in existence, as were the Volunteer Yeomanry cavalry which had been raised before them at the end of the previous century. The numbers of Volunteers fluctuated according to the perceived level of the threat of invasion, as well as the economic conditions of the Volunteers themselves.

In 1861 the Royal Gloucestershire Hussars were first issued with Westley-Richards breech-loading carbines, at six per troop, and in 1870 the whole Regiment was armed with them. The Westley-Richards was a very accurate weapon for its day, though prone to fouling, and an ideal addition to the equipment of the modern cavalryman. Shooting competitions became popular in the Regiment in the 1860s, creating a tradition that would continue for many years, with carbines being given away as prizes to the best shots. Snider carbines replaced the Westley-Richards in 1879.

The official establishment of the Royal Gloucestershire Hussars during the previous forty years had been between 420 to 470 men. In 1875 it was set at 445, but these figures were hard to maintain and in 1881 only 246 men were present with the Regiment for their inspection parade and field day at Cheltenham on 11th May 1881.

Seven weeks previously the First Boer War had come to an end, and Great Britain had signed a humiliating peace. Her scarlet-coated soldiers had been bested by fast-riding and hard-hitting farmers, armed with breech-loading carbines and wearing their everyday clothes. At the battle of Majuba Hill on February 27th the military reputation of the British army had reached a nadir.

The lessons to be learned from the successes of the Boers were not forgotten by Lieutenant-Colonel Burnaby of the Royal Horse Guards, who was the inspecting officer at Cheltenham that May of 1881. He watched the Yeomen of the Royal Gloucestershire Hussars, most of them farmers and countrymen, their ranks thinned by enforced absences caused by the recession which had resulted from a series of poor harvests. He saw them perform their evolutions, resplendent in the uniform of their corps, deep blue and heavily trimmed with yellow or gold braid and lace, their slung outer jackets or pelisses edged with black fur. And at the end of the day, the Regiment gathered around Colonel Burnaby and listened to his address:

“‘He was much pleased at the manner in which they had performed most of the movements, considering the short time available for practice. They had no doubt made some mistakes during the inspection, one of which was, when they were dismounted and the right wing acting on foot, it was placed in such a position that it actually covered the rear. That was an error. Had they been fighting an enemy, the shots in reply to those dismounted would have struck some of their own mounted men. In all cases, and at all times, it must be remembered that the mounted support or escort should never be placed exactly behind them but always to the flank, otherwise the enemy’s fire would be drawn upon them. Again, the firing was too rapid. There was no attempt at taking aim, the sole object of the men seemed to be to fire off their cartridges as quick as they could. If they were on active service they would soon discover the necessity of husbanding their ammunition, and of firing as skilfully and deliberately as possible.’

“Colonel Burnaby went on to say that the Yeomanry of Gloucestershire represented in Gloucester what the Boers did in the Transvaal. They were men who could ride and shoot, and they (the Boers) had shown England what an extremely effective and valuable force a body of Yeomanry could be made, if only they knew how to ride, how to do outpost duty, and, at the same time, if they were good shots. He was glad to hear that many of them took great pleasure in target practice, but after all they must remember that firing at a fixed target at a certain distance was not the best practice for obtaining efficiency in actual warfare. They should endeavour when out walking to judge from themselves the distance from one tree to another, and then step it. By this mean they would accustom the eyes to correctly judge distances, even in the course of their ordinary occupation. If they did this, they would find it to be an enormous advantage if they were ever called upon to fire at an enemy at an uncertain distance. He would thank them for the efficiency they had shown, and also for proving to him that a regiment of Yeomanry, after a little training, although not up to regular troops, could do its work remarkably well.”

W.H. Wyndham Quin, “The Yeomanry Cavalry of Gloucestershire and Monmouth”. 1898.

In less than twenty years Colonel Burnaby’s words would be put to the test, as officers and troopers of the Royal Gloucestershire Hussars found themselves in action against their counterparts in South Africa.