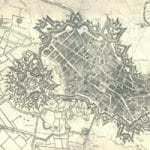 “The regiment was with Marshal Wallace’s army in this year in Flanders, and served in the campaign under Field Marshal Wade. The army was encamped near Brussels, and afterwards behind the Scheldt. But the enemy having so great a superiority of numbers, no offensive movement was made until a body of French troops was despatched to oppose Prince Charles of Lorraine in Alsace, when the Allies crossed the river. No engagement, however, ensued, and after penetrating the French territory as far as Lisle [Lille], the allied army returned to Flanders for winter quarters. One incident occurred that proved fighting was quite as genial to the soldiers in Flanders as swearing. An officer of Bragg’s regiment was sent out with a foraging party of one man from each tent, when, by his ignorance of the language and topography of the country, he found himself close under the guns of Lisle, [Lille] and to an outpost of the enemy employed in reconnoitring. The outpost, consisting of a captain and 80 men, learnt from the natives that Bragg’s men were without arms, and marauding, and sent a non-commissioned officer with 12 men to intercept them. This party, seeing a few men without arms, fired, and endeavoured to make prisoners of them. But Bragg’s officer, with his reserve, who were posted outside the garden and village out of sight of the enemy, sustained the attack, killing one and making another prisoner, and bringing off two of their adversaries’ firelocks.”