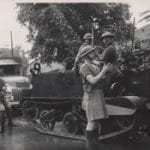 7th December 1941 found 1st Battalion, The Gloucestershire Regiment based at Rangoon, one of only two British battalions in Burma employed in internal security duties. When the Japanese invaded Burma at the beginning of the 1942 1st Battalion was guarding the approaches to the capital, road, riverine and at Mingaladon airfield. After British defeats at Sittang and Pegu, the road to Rangoon lay open and the decision was made to evacuate the city in February 1942. Under the leadership of Lieutenant-Colonel Charles Bagot, the Gloucesters patrolled the streets, guarding against looting and preparing the demolition of the oil refinery at Syriam, which was blown up on 7th March. Their first action against the Japanese was at Taukkyan on the 7th/8th March. It was here that the main force of the understrength Battalion took part in the successful breaking of a Japanese roadblock to the north of Rangoon which had cut off 17th Indian Division, the Rangoon garrison and General Sir Harold Alexander, commander of the Burma Army, with Army Headquarters from their line of retreat.

After this action, the Battalion transferred from Burma Army Command to become became the Reconnaissance Regiment of 17th Indian Division, covering its retreat. A fortnight later D Company, 1st Battalion set an ambush at Letpadan, which was very successful, and drove the advancing Japanese back in great disorder.

“. . . The success of the 28th at Letpadan depended in large measure on the manner in which Lieutenant Sibley’s platoon carried out the dangerous task assigned to them. . . . Amongst the numerous gallant actions fought by small sub-units during the campaign, this one stands out, both for the determination with which they fought against superior numbers of the enemy, in order to achieve their object, as well as for the very important results that followed. . . . Although our further withdrawal was set for 20th March, we maintained patrols in Letpadan for a further week. Thus the enemy advance was considerably delayed and, in fact, we were never again pressed by their advance guard for the remainder of the campaign.”

“Alexander to Bagot – Heartiest congratulations on splendid operation at Letpadan. Congratulate Company Commander from me personally.”

“Cowan to Bagot – My heartiest congratulations to you and all ranks. A splendid show and just what I wanted. You have set a fine example of enterprise and proved that we can defeat the Jap at his own game. Chief was delighted.”

Nevertheless, 1st Battalion was in action again at the end of the month, beating off enemy pursuers at Paungde and fighting its way through Japanese forces which had cut the line of retreat at Shwedaung. Sergeant Dunkley remembered an incident at Paungde:-

“An enemy aircraft flew over our positions and dropped a couple of bombs – anti-personnel we thought they might have been. Cpl George Candle had a go at it with the Bren and it just flew away. The platoon received no casualties but a few minutes later a few shots came our way Unfortunately Cpl Candle was badly wounded in the upper part of the left arm; he was given medical attention and shortly after this was put on a carrier and taken back to R.A.P. [Regimental Aid Post]. We said cheerio and his last words to us were “I’ll keep one on ice for you at Calcutta.””

The British retreat continued northward towards Mandalay which the Gloucesters reached on 23rd April, now down to one hundred and seventy-seven officers and men. Lieutenant-Colonel Bagot, who had been wounded at Paungde, returned to the battalion, together with a draft of a hundred reinforcements. It was near here that with transport being in such short supply it was decided that the Regimental silver, pictures, band instruments and other property were to be buried in Shwebo cemetery in a false grave named for “Private Bragg”. However, this plan was abandoned and the silver taken further up country to be buried in the jungle, with the exception of a few small pieces that could be carried in pockets.

The much weakened Burma Army continued its retreat towards India, first crossing the River Irrawaddy and falling back on 10th May to the River Chindwin which marked the border. At Monya, the Gloucesters fought their last rearguard action of the campaign, and were the last unit to cross the Chindwin into India. Their destination was Imphal. Private Coppard recalled the final miles:-

“Well, we plodded on our way and finally we came to a road marked ‘Imphal 20 miles’. On this road going to Imphal were lines of lorries. We tried to get a lift but the drivers, who looked like English troops and Officers, took no notice. We must have looked a queer sight, three ragged, rough-looking louts with rifles and Tommy gun, covered in mud and sand.

“We walked the 20 miles into Imphal and as we entered we found it deserted except for the lorries passing us – it looked like a ghost town we used to see in the movies in the time of Tom Mix & Company.

“As we walked through we came to a crossroad and standing there was a Military Police corporal with nice white stripes on his arm, we wondered what was going to happen next as by this time we were angry and fed up with the whole of the army.

“As we got down to him he looked at us and said “Where do you think you are going?” so I said “Calcutta, if we can make it, and then home.” He smiled and asked us if we had just come out of Burma, we said “Yes”, so he said that there was a rest camp 13 miles down the road, so we said “Well, I suppose 13 miles won’t hurt us.” He said “You are not walking, I will get you a lift.” Just then an Army tree-tonner hove in sight, he put his hand up and the truck stopped. He asked the driver, who I knew by sight, if he would give us a lift to the rest camp. The driver replied that he had no room. The police corporal pointed his gun at him and said “You will give them a lift, Sgt.” He said “Alright, get in the back.” We did and found he had only six men in there.”

1st Battalion was brought up to strength and remained with 17th Indian Division near Kohima and Imphal until July 1943 when it was sent to Calcutta. They spent the rest of the war in policing duties in India.

In January 1945 some officers went back into Burma to recover the buried Regimental silver. It had all gone, probably dug up by local Burmese, and was never to be seen again by the Regiment except for one George IV soup tureen and one candelabra.