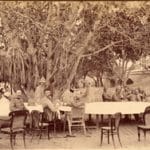 In 1880 the 61st returned to India after an absence of more than twenty years. They were to remain in India for a tour of duty which lasted until 1893. The British Empire was at its height, and India was the jewel in the Empire’s crown.

“When the cholera comes – as it will past a doubt –
Keep out of the wet and don’t go on the shout,
For the sickness gets in as the liquor dies out,
An’ it crumples the young British soldier.”

William Howell of Chipping Campden recalled his time in the ranks of the 61st in India, fifty years on:

“… we joined a draft for India in 1886 and joined the 2nd Battalion at Ahmednagar, where the cholera was very bad. We moved to Poona for Camp of Exercise in 1888 and then on to Deolali. That was my worst station, fever and ague with no injections in those days. In 1889 we proceeded to Bombay. Whilst there I was on two guards of honour. The first was for Prince Albert Victor, later Duke of Clarence, and the second for Lord Roberts. I also saw Captain Haig [later Field Marshal Earl Sir Douglas Haig], as he then was, play for the 4th Hussars at polo and won against the Bombay Gymkhana.

“In 1890 I left Bombay to proceed with my company to Deesa. It was hot and healthy there though the shade temperatures went up to 118 degs. [48 degrees Celsius] in summer. We had punkas and the tatties [wetted mats] at doorways. It was a treat to get by the latter to get a breath of fresh cool air.

“Then we marched back to Palumpur to wait another company from Ahmedabad and went on the B.B.C.I. [Bombay, Baroda, and Central India] Railway to Nusserabad in Rajputana. In 1892 we had two companies on detachment at Neemuch. We had it pretty rough there, losing a hundred men from cholera and enteric in the first year out of the Regiment of about 800 strong. Two of the lads came from Moreton and one from Campden, a namesake of mine.

“I am pleased to say that I escaped it. There was only one man I know who pulled through from cholera. He was an old soldier named Bill Darke, whose home was Blockley. He was congratulated for luck and pluck and Captain Tufnell gave him a beautiful watch, a personal gift of great sentimental value, on his recovery.

“One man wrote a letter to the Bristol Times, and they printed it. He stated that if we had been the Guards or some posh regiment we should have been shifted. He took the risk on his own and a court martial and 84 days behind bars at Poona prison for it.”

“Whilst we were quartered there, there was a bad outbreak of cholera at Nasirabad: we lost over 30 men, Colonel Curtis got it, but recovered. The system at that time was to march out of cantonments 8 or 10 miles, and then camp, and keep moving camp when there were more cases, until the outbreak ceased. In order to keep up the spirits of the men, the canteen was kept open late, and no attempt was paid to those who got merry. There was a man called Pte. Smith in “D” Company, with four Good Conduct badges, who could not find his tent on leaving the canteen; he fell over many ropes until he found a tent which gave out no curses when he tripped up, so he crawled in and laid down on the ground and went to sleep; when he woke up in the morning he found he was in the mortuary tent with five corpses, but he was none the worse for his adventures that night.”

But life could be good for the British soldier in the India of the time, especially for officers. There was plenty of free time for sport, hunting, exploration and other forms of relaxation, and servants were cheap and plentiful. Lieutenant Burges was a keen game hunter :

“In 1891 we were transferred to Rajputana, with six companies at Nasirabad and two at Nimuch. This was a much better station, there was good duck, snipe, quail and sand grouse shooting, with black buck and Chinkara, and some pig sticking.”