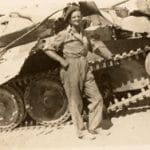 2nd Royal Gloucestershire Hussars arrived in Egypt on 1st October 1941 as one regiment of 22nd Armoured Brigade which was allocated to reinforce 7th Armoured Division, in preparation for General Sir Claude Auchinleck’s planned offensive in November. 7th Armoured Division, whose divisional emblem was the jerboa, or “Desert Rat”, included two other armoured brigades, the 4th and the 7th, as well as an infantry support group. In 1st Army Tank Brigade were 44th Royal Tank Regiment which had been converted into an armoured battalion from 6th Battalion, The Gloucestershire Regiment in 1938. A year later 50th Royal Tank Regiment was created when 44th RTR was split into two battalions, and it too would later see service in the Western Desert.

The opening campaigns of the war in Africa in 1940 had seen enormous gains made by British Commonwealth and Empire forces, with Sir Alan Cunningham’ army destroying the Italian forces in Ethiopia and Sir Richard O’Connor’s Western Desert Force advancing across Libya. Hundreds of thousands of Italian prisoners had fallen into British hands. But overstretched lines of communication and inadequate resources ensured that when the German Afrika Korps under Lieutenant-General Erwin Rommel arrived to shore up the Italians, all the territorial gains made in Libya were lost and the British had been driven back into Egypt. General Wavell was replaced by General Auchinleck as Commander-in-Chief Middle East and Lieutenant-General Cunningham was given the command of the newly formed 8th Army.

Operation Crusader began on 18th November 1941. 22nd Armoured Brigade’s advance was slower than had been hoped for because their crews and their new Crusader tanks had not had sufficient time to work up to full operational efficiency for desert warfare. The unreliability of the new tanks was to be a constant thorn in the side during the coming months. On 19th November the brigade ran into the Italian “Ariete” Armoured Division well dug-in at Bir el Gubi. Second-Lieutenant Gordon-Creed had a track shot off his tank. Stuart Pitman, in his book “Second Royal Gloucestershire Hussars, Libya-Egypt 1914-1942”, wrote of Gordon-Creed:-

“. . . He continued, however, to circle on the other track and knocked out two Italian tanks at point blank range. His own tank was then hit again through the turret, and his gunner and wireless operator wounded. When the action died down he and his driver, Trooper Parker, got out the injured men and dressed their wounds, staying with them until the Medical officer picked them up. They then returned to the tank and began repairing it under heavy fire. By working all through the night, in close proximity to the enemy, and with every chance of being captured, they were ready by dawn and brought the tank back to the Regiment; 2nd Lieutenant Gordon-Creed was awarded the M.C.”

Trooper Eric Johnson’s Crusader was called upon to rescue the crew of another Crusader belonging to 4th County of London Yeomanry, which had been knocked on Gubi ridge. No sooner had they got there, when their own tank was knocked out, and both crews hid behind their burning tanks while being sprayed by enemy machine gun fire. Suddenly, someone saw another Crusader approaching at speed. Eric Johnson recalled:-

“. . . There it was, moving flat out over good going. It came onto the ridge trailing its long sausage of dust behind. In the lurid glow of the great fireball on the horizon it caught the enemy’s concentrated fire, turning sharp left and came to a halt in the lee of our two burning hulks. It was Ken Greaves of “F” Sqdn. He said, “right then you lot, take your time, there’s no hurry, two men up on the engine covers, the rest of you pass the wounded up. Easy now, we’ve all the time in the world.” In a few minutes that seemed like hours we were on the back of Ken’s tank, sheltering the wounded and hanging onto each other as though our lives depended on it, as indeed they probably did. All the while Ken sat calmly on the turret watching the enemy and our escape route. At last we were able to tap his arm to let him know we were ready. Through his microphone he checked with each of his crew, gunner, operator, driver, then he turned to us and said, “Right then you lot, hold your hats on.” We came off that ridge faster than any Crusader had travelled before or since. Behind us the burning hulks spewed their exploding ammo into the sky in a farewell salute. Then, at a gentler pace, we found elements of the R.G.H. some 6 miles away forming leaguer in the gathering gloom. We trundled to a halt looking like a bunch of diddicoys on the back of a farm cart.”

22nd Armoured Brigade’s initial successes were very short lived. With no infantry support to consolidate any of the gains they had made, they were forced to withdraw, leaving the powerful “Ariete” Division still dug in. The battle ebbed and flowed with astonishing speed over the coming weeks, with first one side gaining the upper hand, then the other. Command and control at the most senior levels of the opposing armies were slipping. The focus of the battle switched to Sidi Rezegh, as the occupation of this key position would determine the fate of the British garrison holding Tobruk. Corporal Ron Dallas of the Royal Gloucestershire Hussars called it “the absolute chaos of Sidi Rezegh.”

“. . . I think chaos is the only word that applies to the ten days or so that it lasted and for the German and Italian troops as well. We lost a number of men, had a number taken prisoner and wounded and found out to our bitter cost that our 2 pounders were useless against the German tanks.

“. . . On top of that we had the November Handicap, when Gerry broke through and half the 8th Army seemed to be streaming backwards. We managed to get a quick word with some South African Units and they said “half the German army is behind you now.””

Nevertheless, by 7th December, Rommel’s losses in tanks had vastly outstripped the rate at which they could be replaced, and the 8th Army had gained the upper hand. Rommel was forced to abandon the siege of Tobruk, and gave the order to retreat, a delicate operation which was undertaken with great skill as his pursuers closed with their foes. The Crusader tanks of 2nd Royal Gloucestershire Hussars had taken a hammering and on 5th December the battalion been re-equipped with American M3 Stuarts, known to the British as “Honeys” because of their reliability. They weren’t entirely popular with their crews though – their 37mm guns were not quite as powerful as the weak 2 pounders of the Crusaders, and unlike the sleek British cruisers, they had a high profile, making them difficult to conceal in the open terrain of the desert. In fact, the first batch of fifty-two Honeys had been taken over from the 8th Hussars, and they were already close to being worn out themselves.

During the pursuit 2nd RGH was temporarily attached to 7th Armoured Division’s Support Group, and then to 4th Armoured Brigade, before returning to 22nd Armoured Brigade. As the battalion swept west across the desert, air attacks became increasingly frequent and eventually German and Italian resistance began to stiffen as their supply lines shortened and those of the British lengthened. On 28th December, the new realities became apparent, as Stuart Pitman indicates:-

“. . . By afternoon, the German tanks had increased in number and some fifty attacked, but at long last we had a good hull down position and their advantage in the range of their guns was largely offset, though their thicker armour still made it difficult to knock them out. But we were forced to withdraw to the ridge behind us . . . and the enemy column to the west began to move round our right rear. Late in the afternoon the shelling increased still more and the German tanks advanced . . . finally we were all forced to withdraw in a hurry through the fast narrowing gap. The enemy guns lengthened their range and kept on shelling us with accurate violence for some time. The tanks were now very nearly out of petrol and in danger of coming to a standstill within easy reach of the enemy, so an urgent message was sent for a refill . . . and just as we halted to fill up . . . we were heavily bombed by Stukas sent over for the express purpose of catching us in that vulnerable situation.”