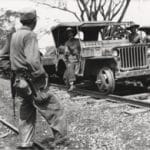 In February 1944 10th Battalion, The Gloucestershire Regiment arrived from India on the Arakan Peninsula in Burma. The battalion had been formed in 1940, and in April 1942 had been converted to 159 Regiment Royal Armoured Corps. The new tank regiment had arrived in India in December 1942 and joined 32nd Indian Armoured Division, but in March 1943, it was converted back to infantry and the 10th Gloucesters were reborn. The battalion was part of 72nd Brigade together with 6th South Wales Borderers and 9th Royal Sussex, and 72nd Brigade came under the command of 36th Division, led by Major General F.W. Festing, who later became affectionately known to the troops as “Front Line Frankie”.

36th Division found itself under XV Corps, Fourteenth Army and, during the initial phase of the Arakan offensive in February 1944, was held in reserve. They took part in the successful relief effort during the battle of the Admin Box, and in March and April 10th Battalion took part in the resumed offensive before the monsoon set in. This part of the fighting involved the capture of two railway tunnels which had been occupied as fortresses by the Japanese, and the capture of Hambone Hill, near Point 551. Lieutenant Gardner recalled a few months later several incidents that took place during the Battle for Hambone Hill:-

“I went up into the centre of the position and was soon chatting to the Platoon commander. His story, briefly, was that they had reached the North Feature without trouble and on the arrival of the second platoon – commanded by a Sergeant – the Patrol Commander had sent them through to see what was on the South Feature. They approached down the west side and reached the summit without seeing anything. Then the leading Scout (a Pte.Venn who received the M.M. for his part in this battle) looked over the top and saw two Japs, stark naked, sitting on the edge of a trench. He coolly walked over the top and shot them both, and then advanced towards a bunker position beyond. Grenades started to rain on him, but miraculously did him no harm. He in turn threw his grenades at the slits in the bunker but unfortunately failed to hit them. The rest of his section came up and fired a bit, but owing to the proximity of darkness they decided to withdraw as the position was a very strong one. This they did, and in such good order that there were no casualties and no one was even lost.

“They then consolidated the North Feature and waited for darkness. The Japs’ first effort was a bold advance down the saddle between the features, throwing grenades which proved to be comparatively harmless, being used more for the noise effect apparently. . . . The attack was easily beaten off as were all the rest of the attacks which were put in, on and off, all night. Thanks to their thorough consolidation, no casualties at all were received. Although daylight showed no Jap bodies, they knew that several had been shot at point blank range and a good deal of groaning etc. had been heard. The Japs must have removed all their casualties as they went back.”

In May 36th Division was moved into Reserve at Shillong, and in July the Division was transferred to the American General “Vinegar” Joe Stilwell’s Northern Combat Command, operating out of China into northern Burma. The entire 36th Division was flown from Ledo to Myitkyina in a five day airlift. The Japanese held city of Myitkyina had long been under siege but the capture of its airfield by Merrill’s Marauders allowed reinforcements to be sent to the Stilwell’s army. Major Richard Butler of 10th Battalion described the Gloucesters’ flight in and their first meeting with their new American general:-

“As the Japanese held absolute air superiority over Myitkyina, I felt I ought to ask what protection we had whilst flying in. There was a long silence on this, and then the suggestion was made that we stuck the Bren gun through one of the Dakota’s windows ands shot down the fighters. I thought I had better not tell the advanced party about this until we got into the aircraft.

“Next day we had a pleasant quiet flight over thick jungle country until, eventually, we saw two high plumes of blackish smoke ascending into the sky. This turned out to be Myitkyina airfield and the smoke was arising from two aircraft blazing on the runway. As soon as we landed we were met by a very excited party, who said the Jap fighters had just left, after shooting up the two planes. As they were expected back any minute we were hurried off the airfield and put behind a large stack of something for our protection.”

After a short but strenuous march the advance party of 10th Battalion arrived at their camp later in the day:-

“. . . We had all settled down and I had just marked out the area for each company when three jeeps arrived. Out of the first one got the famous General Stilwell, “Vinegar Joe”, who had come to “Greet the British.” The general was a small thin man dressed in American combat uniform with a rifle slung over his shoulder. We fell in on parade and he asked me the name of my Regiment. When I said it was The GLOSTERS he said “He was mighty pleased,” and then gave us a most comprehensive talk on the County of Gloucestershire in general, and about Broadway down to the last detail. We were all dumbfounded. He then said to me, “Say, how many of your Boys come from Gloucestershire?” Now, this was a very awkward question to be asked suddenly as my party was composed of five members from each company, it was a wartime battalion, and I had only seen the other companies’ representatives the night before. I did not wish to tell the General that I did not know, so I said “50% Sir.” With that the old devil turned towards my party and said “All those boys that come from Gloucestershire, put up their hands.” I hardly dared look up to see the result, but when I did I was very glad to see exactly 50% with their hands up. Vinegar Joe then went round and counted them himself. This guess really impressed the General and he could not have given us a more cordial farewell. After he had gone I complimented my advanced party on getting the percentage exactly right. I had a feeling that they must have overheard the Generalâ��s conversation.”

The task that fell to 36th Division was to establish a road link to the south, all the way back to Ledo, from where they had flown. The first objective given to General Festing by Stilwell was Taungni which, after a long march by the division through difficult country following the line of the jeep railway line and some opposition, fell on 19th August. 10th Battalion lost many more men to sickness than combat, although numbers were restored somewhat after a period of rest. The British were soon to come up against the veteran Japanese 18th Imperial Division, which had taken Singapore in 1942. At Pinwe, 10th Battalion was to have a hard fight against these troops during November.

In the morning of 22nd November 72nd Brigade with 10th Battalion began its assault after the enemy positions had been softened up by artillery and air attack. Progress was slow, through difficult bamboo country. The Japanese launched several counter-attacks, and for a time the Gloucesters were isolated. Some of the fighting is described by Major Butler:-

“The company repulsed two counter-attacks from the left; luckily the enemy gave away the direction of his attack by shouting “Banzai” before coming in. “B” Company suffered many casualties from snipers in the trees whilst digging in on the near bank of the chaung [stream]. The trees in this area were ideal for snipers. Twenty feet above the ground the trunk divided into arms; this formed a natural bowl in the middle and the bowl area was overgrown with ferns. A sniper could rest in safety in the bowl, and so get excellent concealment from the ferns whilst firing. The company commander, Major Steadman, and his two subalterns were killed during this period. Major Steadman had commanded “B” company for three years and his death was a great loss to the battalion. The only remaining officer in “B” Company provided some comic relief to the battle. After consolidating his Company, he reported at Battalion Headquarters fully armed and equipped, but minus his trousers. These had been ripped off when struggling through the bamboo during the advance. He explained that he felt very vulnerable without his trousers, and could someone lend him a pair.”

The Gloucesters were relieved on 26th November, and Pinwe fell two days later. By the end of the year 10th Battalion were across the Irrawaddy and concentrated at Kunchaung.