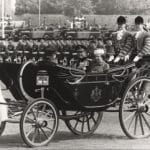 1st Glosters returned to Berlin in February 1986. Little had changed since May 1969; even Rudolph Hess was still in Spandau Prison. The highlight of the two-year tour was the annual Queen’s Birthday Parade in May 1987, taken by Her Majesty, Queen Elizabeth herself, in the 1936 Olympic Stadium, when the Colours ‘trooped’ were those of the 1st Battalion, The Gloucestershire Regiment.

“Today’s parade at the Maifeld was one of unqualified excellence. I was much impressed by the turnout, bearing and drill of My troops, and by the precision and timing of the flypast. Please convey my congratulations to Brigadier Powell, the Escort to the Colour, and to all those whose hard work and preparation have been repaid by the success of a memorable occasion

The infamous Berlin Wall, which divided the City into two, was begun in August 1961.  Initially it was a wire fence but by 1975, it had become a concrete wall, 12 feet high, overlooked by guard towers and with a ‘death strip’ on the Eastern side.  There were nine crossing points but only one, Check Point Charlie, through which Allied Troops could enter East Berlin, which they did on a daily basis, as it was manned by Russian troops and so the Allies were able to avoid ‘recognising’ East Germany.

There is no firm figure of how many East Berliners were killed trying to cross the Wall but a best estimate is 136.  The gates were finally opened and the Wall began to be demolished on 9 November 1989, just over a year after 1st Glosters had left the City.

Rudolph Hess was the only Nazi war criminal still imprisoned in Spandau guarded by each of the Four Allied Powers in rotation.