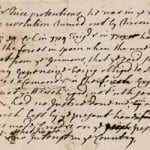 Barrell’s Regiment had been sent to Ireland in 1720, where it was to remain for the next twenty-two years. In 1730 a new Colonel was appointed to replace William Barrell.

Nicholas Price was a Brigadier, struggling to maintain his way of life on a Colonel’s half-pay. He appealed to the king to grant him the colonelcy of a Regiment which would be a very profitable business, pointing out his past services, and the injustices he had suffered.

“Brigadier Price pretentions, he was in ye army before the revolution turned out Tirconel was Lt.Col. in ’94, Col. 1704, Brigadier in 1709, had the Honr to comd the forces in Spain when they were orded to separate from ye Germans, that ye said service was very expensive being obliged to keep a table and live as a Comdr in Chief, wh. expenses have not yett discharged, notwithstanding  of wh. I have had no justice done me, in any reigne but much less in ye present having younger officers made Brigadrs on ye fresh establishment that have no Interest in ye Country.”

The correspondence continued after Price had been promoted to Major General, and his request for a colonelcy was finally granted.

“Whitehall, 25th Aug., 1730. – My Lord, His Majesty having thought fit to order a Commission for Brigadier William Barrell, who hath now a Regiment of Foot in Ireland, to be Colonel of A Regiment of Foot in the Island of Minorca, in the room of Colonel Robert Handasyd, I am commanded by His Majesty to acquaint your Grace therewith, asnd to desire that you will be pleased to give direction for making out a Commission for Major-General Nicholas Price, who is now on the British Establishment of Half-pay as a Reduced Colonel of Foot, to be Colonel of the Regiment of Foot in Ireland, in the room of said Brigadier William Barrell.

“I am, with the greatest truth and respect,
“Your Grace’s most obedient and most humble servant,
“Wm. Strickland.
“His Grace the Duke of Dorset.”